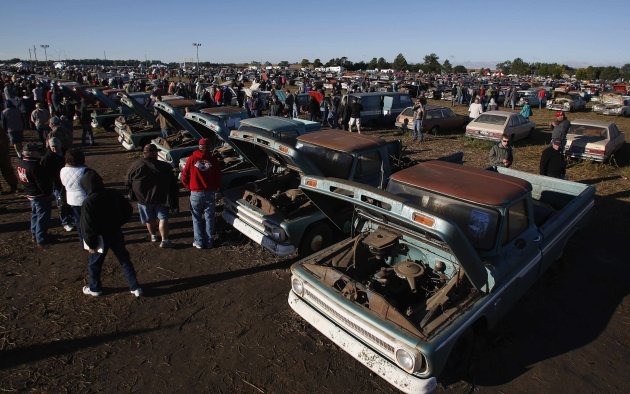 PIERCE, Neb. (AP) — A handful of barely driven vintage Chevrolets fetched more than half a million dollars on Saturday at an auction that drew thousands of car buffs from around the world to a small northeast Nebraska town.

Bidders and gawkers crowded shoulder-to-shoulder for the auction in a muddy field just west of Pierce, a town of about 1,800. Spectators in helicopters and airplanes circled overhead as the lead auctioneer, Yvette VanDerBrink, inched down the auction line on a wooden platform hauled by a pickup.

Event organizers said an estimated 10,000 people traveled from as far as Norway and Brazil to see the sale in person, and more than 3,800 had registered online to bid at an auction website by mid-day Saturday.

The auction of more than 500 old cars and pickups was expected to continue on Sunday. Organizers said they hadn’t yet totaled the bids for the roughly 50 most high-profile, low-mileage classic cars and trucks, which were auctioned on Saturday. As of midday, six of the most valuable models had sold for a combined $545,000.

The collection belonged to Ray Lambrecht and his wife, Mildred, who ran a Chevrolet dealership in downtown Pierce for five decades before retiring in 1996. Unlike most dealers, Ray Lambrecht stashed many of his unsold cars in a warehouse, at his farm and other spots around town if they didn’t sell in the first year.

Lyle Buckhouse, a retired farmer from Hankerson, N.D., poked his head Saturday into a 1963 Chevy Corvair with 17.2 miles on the odometer. Moments later, the self-proclaimed “Corvair guy” was hunting eagerly for the bidder-registration tent.

“This is a once-in-a-lifetime opportunity,” Buckhouse said. “That’s why I came down here. You just don’t know what you’re going to see.”

“This is one of the cars that I had my eyes on,” Esler said, as he leaned against his new purchase. “I want to use it to haul all of my customers around.”

“How are you getting it back home?” a friend asked.

Esler shrugged. “I haven’t figured that out yet,” he said.

Preparations for the two-day auction began in June. VanDerBrink, the auctioneer, said she took calls from as far as Iceland, Singapore and Brazil before the event.

Some bidders used the auction to hunt for rare parts for their collector cars and trucks, while others came to watch the spectacle.

“What drew us here as much as anything was the story,” said Ernie Turcotte, who drove with his son, Jeff, from central Massachusetts to look for fenders and running boards for his 1955 Ford F-100. “I don’t understand how it even happened. But here they are.”

Ray Lambrecht opened the downtown dealership with his uncle in 1946, on the corner of Main Street and Nebraska Highway 13. The U.S. Army veteran quickly established himself as an unusual salesman: He gave his lowest price up front, without negotiation, and encouraged hagglers to try to find a better deal elsewhere.

In 1954, he drove then-Gov. Robert Crosby down Main Street in a parade celebrating the 100-year anniversary of Nebraska as a territory.

The most valuable vehicles were stored for decades at a nearby warehouse, until a heavy snow collapsed the roof. Some were damaged, but many were saved and moved elsewhere. The models at the dealership were among the best preserved, even as the building gave way to bats and holes in the roof.

Ray and his wife, Mildred, retired in 1996. Ray, 95, and Mildred, 92, still live in Pierce, but their health has declined. They decided to sell the collection so others could enjoy the cars and pickups, said their daughter, Jeannie Stillwell, who lives in Florida.